The Daily Gourmet recently had a deal featuring Cinnaholic, a local vegan bakery specializing in cinnamon rolls, that was too good to pass. So I ordered. One week later, a box of 12 huge cinnamon rolls arrived in the mail. And I do mean huge. They're the size of my hand with my fingers spread out! The rolls came with four kinds of toppings packaged separately. I added the strawberries myself, so don't blame the company for the looks!


*****
Here's another cute guinea pig video I came across recently:

Email ThisBlogThis!Share to TwitterShare to FacebookShare to Pinterest
Labels: cinnaholic

Before learning to cook, I rarely ate beans. I didn't like the taste and texture of it. My first like of beans only happened in college when I bought a veggie burrito with black beans in it. Love! Since then, I bought canned black beans just to replicate that burrito at home.

So it was a departure from my regular eating routine to make Isa's Classic Black Bean & Veggie Chili. I can count the number of times I've eaten chili on one hand, usually because they're spicy which I can't take. But I had to use up the leftover black bean from the quinoa salad and this seemed tasty. 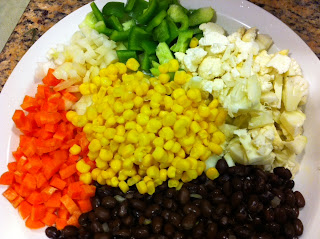 For the veggies, I used corn, cauliflower, green bell pepper, carrot, and onion. As I was cooking, DH came over for a peek and commented, "Wow, looks really healthy." That's code for, "I don't think I'll like it that much." DH isn't a bean person at all.

My modifications:
1. I left out the chili powder since I can't take the heat. I guess I can't really call this chili now can I?
2. I didn't have diced tomatoes, canned or fresh, nor tomato paste. But I did have a jar of pasta sauce! Worked out okay, methinks.

Verdict:
I ended up eating the bulk of it since, ahem, someone really doesn't like beans. ;-) This works great in a tortilla wrap too, but then again, what doesn't? As I like to say, everything tastes better in a wrap!

*****
This funny video demonstrates why guinea pigs aren't a good choice for film. Thanks to Papua Piig for sharing!

Have you ever seen pineapple rice served in the shell of a pineapple? The first time I saw it, I was so amazed at the presentation. It's so clever, don't you think? And no dishes to do afterward, bonus! :-)

Though I didn't serve Isa's Bhutanese Pineapple Rice in a pineapple shell, it was nevertheless simple and delicious. The addition of fresh cilantro was a nice touch. I served it with Masala Baked Tofu.

My modifications:
1. used white jasmine rice, not Bhutanese red rice (never heard of such a thing!)
2. used curry powder since I was out of red curry paste
3. sauted the pineapple chunks at the beginning with the onion, garlic, and ginger instead of adding it at the end; I like my pineapple a little caramelized.

Verdict:
This is my favorite recipe from the book thus far. DH thinks it's a keeper too.


*****
I've been remiss in telling you about the TofuXpress gadget I won last year and that is not to say I haven't been using it. Quite the opposite! I'd never bothered to press my tofu before I got this handy gadget. Now tofu rarely gets cooked without going into the Tofuxpress first, even if just for a few minutes. The instruction tells you to press the tofu for an hour or more, but five minutes usually squeezes out enough water for my purposes. With the water out, the tofu fries much faster. DH also marveled at the difference it makes. I love this thing!  Does anyone else use the TofuXpress?


*****
This is Bert and Belle squeezing for space along the crook of my arm while we cuddled in bed. I usually have just one at a time so they're not used to sharing the space. ;-)

Have a great week ahead!
Posted by Vegan Wheekers at 7:53 PM 2 comments:

Isa's recipe for Herb Roasted Cauliflower & Bread Crumbs seemed similar to how I usually make roasted cauliflower but the bread crumbs were a new twist I had to try!

Usually when bread crumbs are involved, there's a batter of some sort to make it stick to the food. But nope, not in this recipe! Isa just instructs us to lightly dampen the cauliflower and the bread crumbs would stick just fine. Brilliant!

My modifications:
1. I didn't use any oil or cooking spray.
2. I added onion and garlic powder to season the bread crumbs.

Verdict:
Yum! I brought it to work and a non-vegan said it tasted like there was Parmesan on them because of the seasoned bread crumbs, which surprised me since I didn't even add nooch. Hmm, that's another idea...  :-)