Izzy over at Whirled Pea posted an easy alfredo sauce recipe that I tried today. I kind of approximated the amount, and added peas and corns as a quick way to get some veggies in. The result was yum! 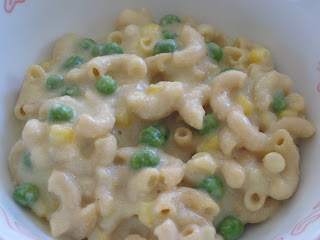 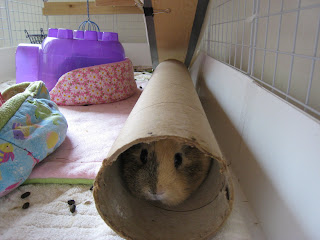 When I first started bread making, I've been kind of frustrated with a basic recipe I found online. The bread always came out a little damper than I liked. Then Rift over at Static8.com posted a bread recipe for me that looked easy enough so I tried it and...voila! 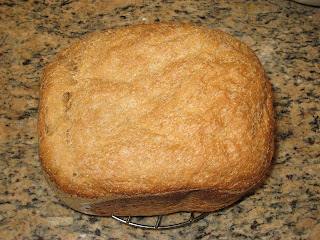 The texture was perfect! 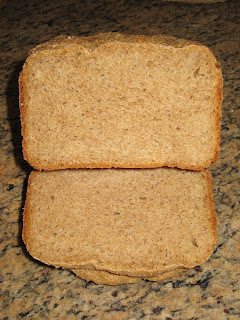 It's just like what we used to buy at Safeway. Here's a guacamole & salsa appetizer I made with the bread. 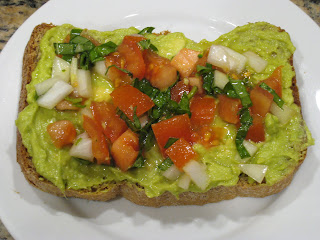 I've made this successfully quite a few times now. Thanks, rift!

What shall we experiment with next? I think I'll try Vegan French Bread!
Posted by Vegan Wheekers at 2:26 PM 4 comments:

Email ThisBlogThis!Share to TwitterShare to FacebookShare to Pinterest
Labels: bread 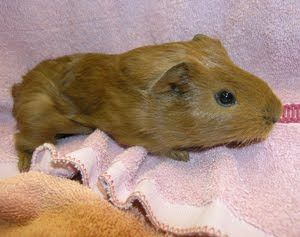 This wee little darling has been at the shelter for nearly a month.
"Cammie is a red female guinea pig, who is cute and friendly and would do well paired with a same sexed buddy to socialize with!"

Belle was about that size when we adopted her. That didn't last long, LOL!

Let's hope Cammie find her forever home soon too!
Posted by Vegan Wheekers at 11:54 AM No comments:

Email ThisBlogThis!Share to TwitterShare to FacebookShare to Pinterest
Labels: sfacc

I sit riveted to Twitter and the Hawaii news station kitv.com for the latest news on the Chile earthquake and resulting tsunami. As I write, the tsunami watch is on in Hawaii but fortunately nothing too alarming has happened yet.

Chile has received over 50 major aftershocks (over 5.0 magnitude) since the 8.8 earthquake last night. FIFTY. OVER 5.0. This list on the USGS website is chilling.

I cannot imagine having to experience a constant rumbling of that magnitude, especially after the epically huge one. My heart goes out to the Chilean people and hope they get the help they need soon.

Last night after learning of the earthquake, I went into prep mode for the guinea pigs - packed their carrier with food and water, and ensured nothing could fall on them around their cage. How else do you prepare guinea pigs for an earthquake?

As for the humans in this house, we've got our gallons of water and canned food ready. Hubby doesn't seem worried at all; I think I'm doing enough worrying for the both of us, LOL!

Take care everyone. Make sure you're prepared for natural disasters in your area of the world. A list of resources for review:
http://www.fema.gov/areyouready/
http://www.theepicenter.com/howto.html
http://www.redcross.org
Posted by Vegan Wheekers at 1:08 PM No comments:

Email ThisBlogThis!Share to TwitterShare to FacebookShare to Pinterest
Labels: earthquake

Wow, what a week it has been! The Powers That Be kept the punches coming and I'm flat out today. I shall now seek refuge with Emma on TV, a guinea pig on my lap, and a huge bowl of ice cream in hand.

But before I do, here is a recap of my trip last month....

The first week of the new year (after the Belle vet scare) brought me to Las Vegas for the CES tradeshow. I was still anxious over the recovery of my little one, but she was in good hands with my mom and sister.

It was my first time in Sin City and here are some of my impressions: 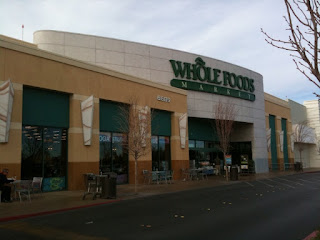 1. WHOLE FOODS - The three people I was traveling with are all vegans so we shared the same concern for finding vegan food. A wrong turn after taking off with our rental car brought us to the Whole Foods Market in Townsquare, which turned out to be very vegan friendly! Take a look at some of their menu boards: 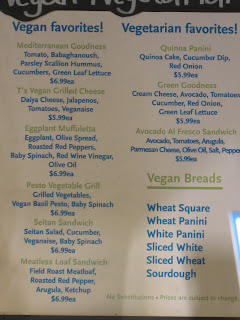 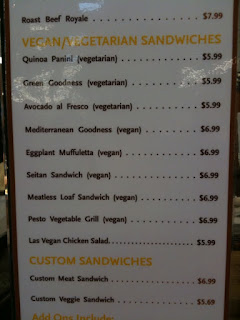 We've seen the vegan bar at the San Francisco locations like this: 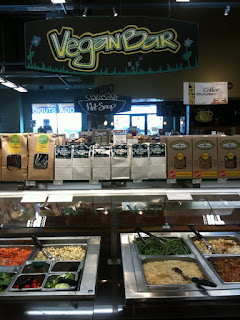 but they didn't have vegan pizza with Daiya cheese like this! 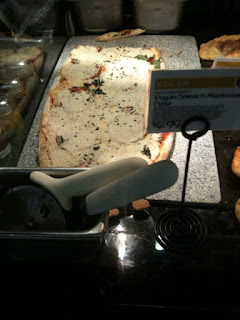 They even had a separate pizza cutter just for the vegan pizza. How cool is that?

We ordered a whole pizza with extra vegetable toppings to split between the four of us. It was huge! 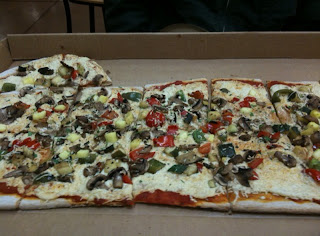 We managed to finish all but two slices. (Yes, we were hungry!)

We came back over several nights to have lunch/dinner here: 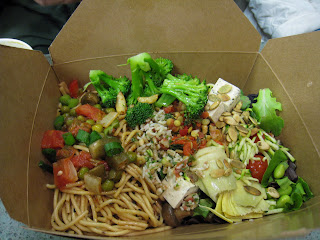 ...until I spotted the flailing legs of a little green insect stuck in my potato salad, blending in quite well with the peas. EWWWW! I'm so glad I paid attention to what I was eating or else that wouldn't have been a very vegan meal, would it? Needless to say, my love affair with the Whole Foods vegan bar ended there.

2. ROOM SELF-SERVICE - It is possible to have a gourmet instant meal made right in your hotel room without a kitchen, or even a stove. Like so: 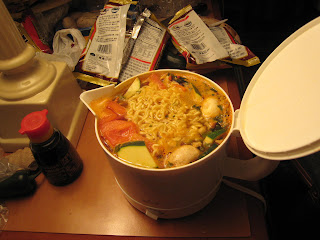 This electric kettle and a bit of imagination was all we need to cook up delicious vegan noodle soup with some ingredients we brought from home and bought at Whole Foods. We also made yummy vegan sandwiches with Tofurky and veggies for lunch since there's a serious lack of vegan food at the exhibition. It was yummier than anything we could buy anyways!
Tip: If your hotel room doesn't have a mini-fridge, bring an ice cooler and top it up everyday with ice from the hotel and voila! your own mini-fridge!

3. Sin City is really so. You've got:
- Slot machines everywhere, including the airport and Albertson's supermarket. I'm surprised they didn't have it in the bathroom stalls! I played a few of the 1 cent one arm bandits for the first time and actually won a dollar back! Still net loss though. ;-) 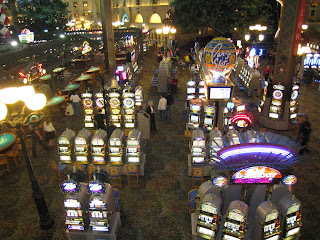 - Sex sells well. There are rows of amigos on busy blocks passing out business cards for "hot babes" and they are quite aggressive at it. My only concern was all the trees going to waste making those cards, which just end up littering the streets.
- Smoking is prevalent. Or maybe it just seems so coming from San Francisco. People smoke in the casinos (ok, no surprise there), in the hotel lobby (eww!), in shopping mall (yucks!), and seemingly right beside me whenever I'm outside on the streets (*cough, cough*). I do believe I've inhaled more secondhand smoke in my one week here than I have in my last 20 years.

And lastly, one lasting impression we got from Vegas was:
- Shock, as in static electric shock. I don't know if it's the desert air or the clothes we wore, but every time we touched metal, be it the car or a door knob, we got zapped. Every. Time. So I learned to kick the car door close with my shoes, push doors open with my sleeve pulled over my hand. Doesn't always work, but it did lessen the "ouch!" curses! Up to now, a month after the trip, I'm still cautious with car doors!

We entertained ourselves after the exhibition by hotel hopping to see all the different styles. Some of my favorites are: 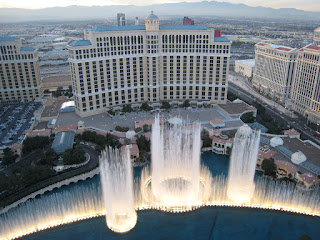 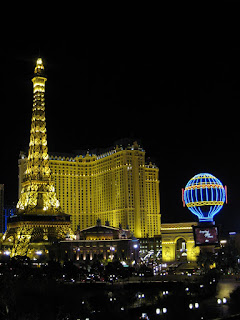 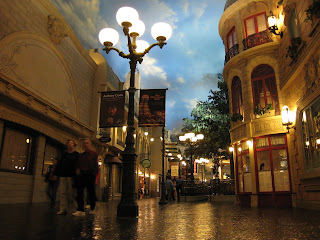 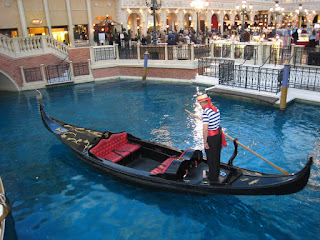 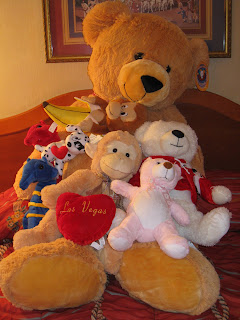 Oh, and because I missed my Wheekers so much, I couldn't resist getting these two fellas when I saw them at the World's Largest Gift Shop. 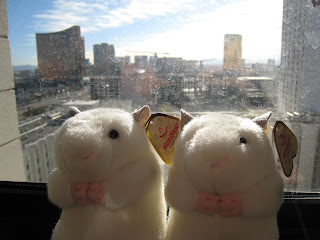